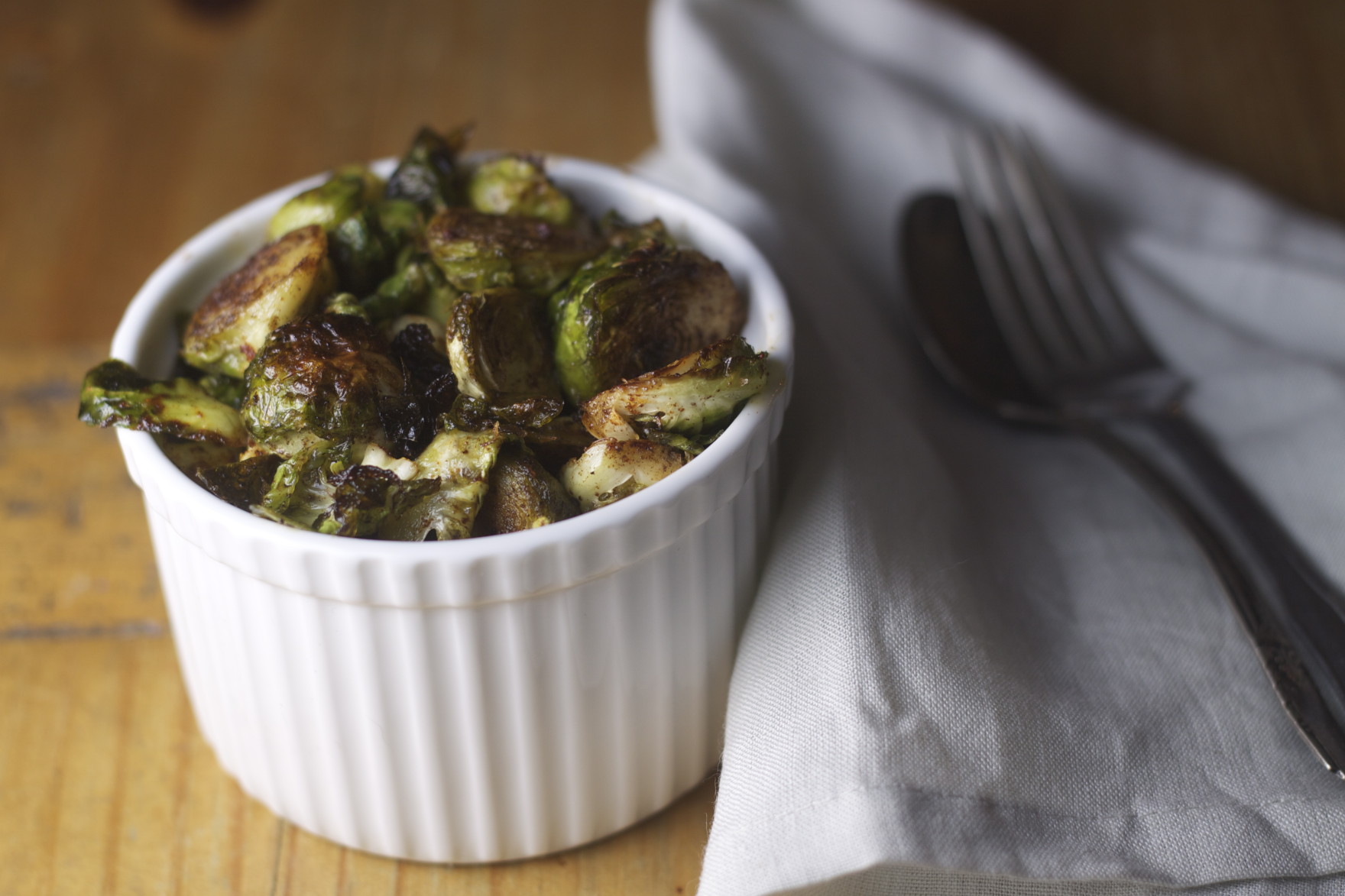 It is important to surround yourself with people who eat the same way you do, which is one of the reasons I love going to a restaurant with my friend Corry. After opening restaurants for godknowshowlong, Corry has rightly learned that the best way to get to know a menu is to order it all, an approach that I appreciate. Every time I’m at a restaurant that offers multiple vegetarian options, whether it be appetizers, entrees or sides, I want to sample as much as fiscally possible. Restaurants usually rely on decadent meat dishes, but if they can use kale in a new way or make me crave your quinoa, it shows that they think about every detail of what they’re offering. A prime example was our meal at Hundred Acres on Monday. We ordered nearly every veggie-friendly dish they had, and they did it all well. This dish is inspired by my favorite…

– 2 cups Brussels Sprouts, trimmed and cut in half (save the leaves that fall off – they get crispy and delicious!)
– 1-2 Tbsp Extra Virgin Olive Oil
– 3 Tsp Smoked Paprika
– 2 Tsp Garlic Powder
– Salt to taste
– 2-3 Tbsp Frying Oil (I used Canola)

Preheat oven to 350. Toss brussels sprouts in olive oil in a baking pan and season with salt. Roast on the bottom rack of the oven until al dente (about 15-20 mins depending on your oven). Mix together the paprika, garlic powder and some salt. In a pan, heat up frying oil until about 375 degrees (I just tested a couple of leaves once I thought it was hot enough). Add roasted Brussels Sprouts and begin to fry. Once they begin to brown, sprinkle with paprika mix and turn to get all sides. Once nicely browned, remove sprouts from pan and drain on a paper town or brown paper bag. Season to taste with salt. Serve hot. 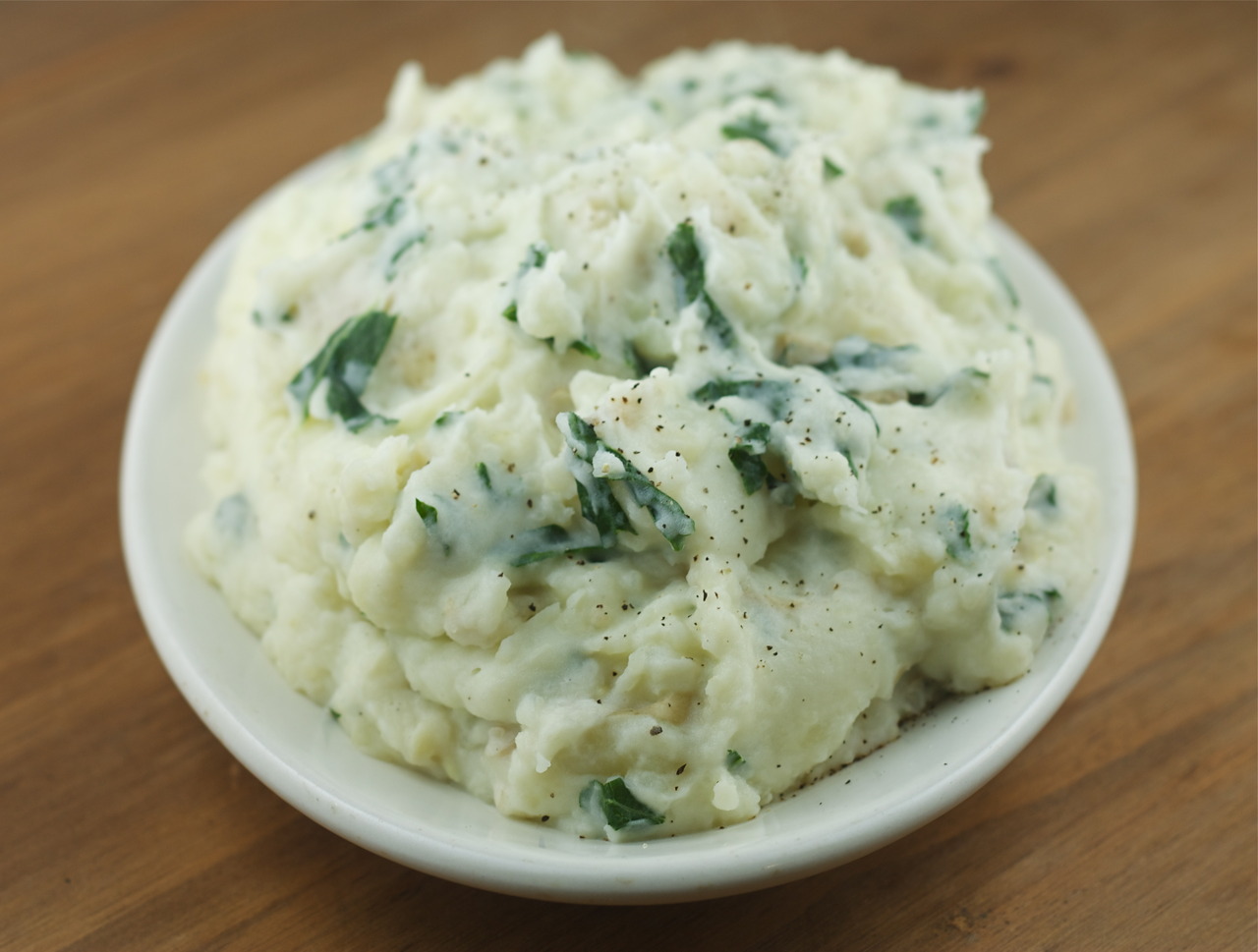 Cut potatoes into 1-2 inch pieces and put in a large pot. Cover with water and add a few pinches of salt. Bring to a boil and cook potatoes until very soft. Drain and put back into the pot. Add 1 cup milk and 2 Tbsp butter and mash with a potato masher. As the potatoes start to get smoother, add goat cheese, garlic, remaining milk and butter. Mix in chopped kale. Warm on low heat until kale wilts. Seasonal with salt and pepper. Serve hot.

Roasted Fall Vegetables with Rosemary and Fig Balsamic ReductionI will admit that I was a bit jealous when I saw everyone with their bags and suitcases on the subway yesterday morning. Though I always love my orphan/friendsgivings, my family always makes epic spreads for the holidays. Plus they have very good taste in wine, which I’m pretty sure they don’t buy for $3 at Trader Joe’s.. I digress.
I’m having a few friends over today and rather than make a traditional Thanksgiving dinner, everyone’s bringing what they want (how free-spirited of us). I’m making fondue, but also thought I’d roast up the vegetables in my fridge. Feel free to use any fall veggies you have laying around for this!
1 Green Squash (peeled)2 Yams, peeled 2 cups Brussels Sprouts, trimmed and cut in halfFresh RosemaryExtra Virgin Olive OilSaltPepper1/2 cup Balsamic Vinegar (I used fig)Preheat oven to 350. Chop vegetables evenly. Toss in olive oil and sprinkle with salt and pepper. Spread on a baking sheet and throw a few sprigs of rosemary on top. Roast in the oven (you might want to toss them around every once in a while so that they cool evenly). While vegetables are roasting, Once tender and starting to brown, lightly simmer balsamic in a saute pan, being careful not to burn. It will reduce by about 50%. Once the vegetables are tender and starting to brown, remove from oven. Serve on a platter and drizzle with balsamic.
Hope you have a wonderful Thanksgiving full of good eating!
Tags

My friends are hosting an early Thanksgiving dinner this Saturday for which I am making Brussels Sprouts and a special treat, along the lines of this. I need inspiration! What’s your favorite holiday drink?

I realize that the week after Thanksgiving the last thing people want to think about is cooking, but as it is the holiday season and everyone and their mother is having a dinner party, it’s always good to have a few recipe ideas on hand. These Brussels sprouts were a major hit at the Thanksgiving dinner I attended. If you pay any attention to this blog, or perhaps my life generally, you probably know I’ve been nuts for B. Sprouts for the past two years. There was a few times last year that I had to stop myself from eating them every day. I digress, let’s get to the recipe. Sweet Lemon + Thyme Brussels Sprouts
Brussels sprouts, trimmed an cut in half1/2 cup pecans, roughly choppedzest of one lemon, plus juice2-3 tbls brown sugar1-2 tbls fresh thymeOlive oilsalt + pepper to tasteToast pecans in a 350 degree oven until brown. In a large pan, saute Brussels sprouts in a olive oil with salt until they start to brown. Turn frequently. Lower the heat a bit and add pecans. Sprinkle with brown sugar. Toss the sprout/pecans until evenly coated. Toss in lemon zest and thyme. Salt and pepper to taste and finish with a squeeze of lemon juice.
In addition to the Brussels, I whipped up some cheesy mashed red potatoes. Mashed potatoes have saved me at many a family meal. To give you an idea, my Aunt Linda and Uncle Gary just sent out the invite to Christmas Eve. On the menu: prime rib and turkey. I am forever grateful that my family loves to over-prepare with 8 million sides and appetizers (and bottles of wine!) I’ve always been a well fed vegetarian, even in a world of salmon, bacon and prime rib. Cheesy Roasted Garlic and Chive Mashed Red Potatoes (these are really unhealthy. Sorry! Also, this makes enough for 10 people…)1 bag of red potatoes, scrubbed and chopped1 wedge Fontina cheese, grated3/4 container of light sour cream1 head of garlic1/2 chives, choppedButtersalt & pepper to taste
In a large pot, cover potatoes with water and throw in a few pinches of salt. Bring to a boil and cook until potatoes are very tender. Chop the tops off of the head of garlic and remove any excess skin. Douse in a good amount of olive oil and wrap in foil. Roast at 350 until the cloves are very soft. Remove potatoes from heat and drain water. Add in garlic, butter and sour cream. Begin mashing, adding in more butter and/or sour cream as needed. Mix in Fontina cheese. Once mixture is a smooth consistency, add in chives and salt and pepper to taste.
(On a side note: I wish I had used milk as well. You probably should.)
I spent Thanksgiving in Greenpoint at the lovely apartment of Brooke and Ryan. We ate, we drank, we danced. I was so full by the end of dinner that I couldn’t touch the spread of pies that people had brought. Once things were winding down, I headed to The Drink, the bar that a few friends are opening very soon. I hadn’t been there in a couple of months, and it’s looking amazing. I’m hoping I’ll get to visit again before I head home next week.
Speaking of home – I’m referring to Washington State, where I was born and bred. I’ll be there for a long stretch – 2 1/2 weeks. Plenty of time to see my niece, catch up with old friends, hug my family and breathe some fresh air.
Finally, I still have a few to edit/upload, but here’s another batch of photos from Louisiana. Bourbon Street View of the French Quarter