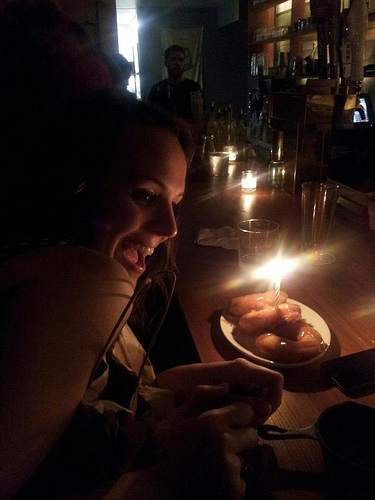 I saw a $5 psychic named Reese within my first hour of being 31. She told me some interesting things, including that I had been experiencing stomach pains. I’m guessing she was referring to how I full I was from dinner at Back Forty. She also asked for my card to discuss planning her nephew’s wedding, so at least I might get a new client out of the whole thing…

Every once in a while, when dining at a restaurant, I’ll pull out a pen and paper (oh fine, I pull out my iPhone) and jot down the ingredients of whatever delicious thing I’m eating so that I can recreate it at home.  I’ve done this twice in the last couple of weeks – once at Rick Bayless’(!) Frontera Grill in Chicago, and then again at Back Forty in the East Village.  My homemade version is usually not exact, but I like getting inspired by other people’s food.
I hadn’t had a Sunday night dinner in a while, so I invited over Kasey, Noel, Mads and Bjorn tonight to help me test these recipes out.  Then we watched Honey, I Shrunk the Kids and tried not to fall into a food coma.  Success! Jicama Salad (inspired by Frontera Grill)Jicama is insanely difficult to find in New York.  I looked at three grocery stores before giving up and going to the Whole Foods.  Bjorn was able to find one at C-town, so now I have enough Jicama to last me through the summer.  Or at least the next two weeks.
1 Jicama rootJuice of 2-3 limes (I used a lemon too, cause my limes weren’t being as juicy as I wanted.)chopped cilantrosalt to taste
Peel the Jicama and julienne.  Toss with lime juice, cilanto and salt. Homemade Foccacia CroutonsFoccacia bread, cubed (I bought a small chunk from Whole Foods for less than $2)2 tbls buttergarlic salt
Melt butter in a saute pan and add bread, tossing to coat.  Let bread begin to brown and crisp, and sprinkle with garlic salt. Chilled Pea Soup (inspired by Back Forty)The soup I had at Back Forty was mind-blowingly good and I must accept the fact that I will never be able to recreate it.
2 bags of frozen peas4 cups of vegetable stock2 1/2 cups of plain yogurt1/2 cup scallions, choppedolive oilsalt and pepper to tastewhite truffle oil (just a drizzle!)In a large saute pan, combine peas and stock and heat on medium.  In a small pan, saute scallions in olive oil until soft.  Transfer peas, stock and scallions to a food processor, add yogurt and blend until smooth.  Salt and pepper to taste.  I garnished with the croutons and mache lettuce, which I bought on a whim today. Spaghetti with Artichokes, Lemon and Ricotta (via Paris and Back)
1 lemon, halved 1 can or jar of artichoke hearts 1/3 cup of extra-virgin olive oil 2 garlic cloves, chopped salt and pepper to taste 1/2 pound of spaghetti (I used whole wheat) 2 tablespoons minced fresh parsley1 cup ricotta cheese (homemade perhaps?) 1/3 cup freshly grated Parmesan cheese 1/2 teaspoon grated lemon zest
Bring pasta to a boil
Place the oil and garlic in a large skillet.  Drain artichokes and pat dry.  Add to pan.  Turn the heat to medium and cook, stirring often, until the artichokes begin to crisp and lightly brown.  About half way through, add the juice from both lemon halves over the browning artichokes. Before draining your cooked pasta, reserve about 1/2 cup of the cooking water in case you need a little moisture later.  Drain the pasta when it reaches al dente, but do not rinse. Once the artichokes are browned, season with salt and pepper to taste.  Toss the pasta with the artichokes and parsley, adding the reserved pasta water as needed.  Serve immediately with a heaping spoonful of the ricotta on top or other grated cheese as you like.
(I only loosely followed this recipe.)
Kasey made a watermelon and feta salad that was super delicious, which I failed to photograph.  So refreshing!