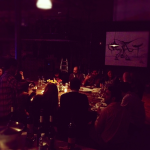 We cooked for 21 people tonight. Four courses. Feeling accomplished and tired.
p.s. After the dishes were mostly done and a little bourbon had been poured, there was a carefree razor scooter ride around the space to Mariah Carey’s “Fantasy.” I had one of those feelings.